In his 75 years, Batman has been the central figure at the forefront of graphic storytelling. From the printed page to the big screen, Bob Kane's creation has never been a more significant fixture in popular culture the world over. This BATMAN 75 DAY COMIC 2014, free for a limited time, features the Dark Knight's origin from DETECTIVE COMICS #27 in 1939, as well a retelling of the story by New York Times bestselling novelist Brad Meltzer and illustrator Bryan Hitch and another short story by current BATMAN scribe Scott Snyder and artist Sean Murphy. Also included is a sneak peak at the reimagining of Batman's 1939 comic book debut, designed by Chip Kidd with a script by Meltzer.  Join us as we celebrate the Dark Knight's 75th anniversary. 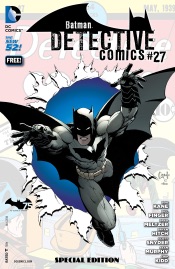