“Wind’s in the east, mist comin’ in.
Like something is brewin’ about to begin
Can’t put me finger on what lies in store
But I feel what’s to happen, all happened before.”
—Bert in “Mary Poppins”

In 1961, Walt Disney invited “Mary Poppins” author P.L. Travers to his studio in Los Angeles to discuss, in person, his continued interest in obtaining the movie rights to her beloved book and character—a pitch he first made to her in the 1940s. Still hesitant and disinterested after all those years, Travers wanted to tell the Hollywood impresario to go fly a kite but with dwindling sales of her books and a bleak economic future looming, PL. Travers said yes and embarked on a two-week sojourn in Los Angeles that would ultimately set the wheels of the beloved film in motion. In the movie, Saving Mr. Banks, audiences will discover how Walt Disney worked his magic on P.L Travers to bring her book to the big screen. Starring Tom Hanks as Walt Disney and Emma Thompson as P.L Travers, the movie opens in theaters everywhere this holiday season. 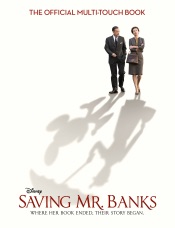