The Tibetan Book of the Dead: Awakening Upon Dying, with introductory commentary by Dzogchen Buddhist master Chögyal Namkhai Norbu, is a new translation of the ancient text also known as The Great Liberation through Hearing in the Intermediate State. Both a practical guide and intriguing historical, cultural, and spiritual document, this new version incorporates recent discoveries that have allowed for a better translation of previously ambiguous passages.

Revealing a set of instructions designed to facilitate the inner liberation of the dead or dying person, the book provides a guide to navigating the bardo--the interval between death and rebirth. Originally composed by Padmasambhava, an important Indian master of the eighth century, the Tibetan Book of the Dead was concealed in Tibet until it was discovered in the fourteenth century by Karma Lingpa, a famous Tibetan tertön (discoverer of ancient texts). Describing in detail the characteristics and fantastic visions of each stage beyond death, the book includes invocations to be read aloud to the dying person, to help his or her successful journey toward the stage of liberation.

Chögyal Namkhai Norbu's introduction clarifies the texts from the Dzogchen point of view and provides a scholarly summary of the ancient material based on his oral teachings and written works. In addition, material from several of Namkhai Norbu's more recent written works and oral teachers have been added, including an essay on the four intermediate states after death entitled Birth, Life, and Death. A full-color 16-page insert of traditional Tibetan art highlights Tibet's unique aesthetic wisdom. 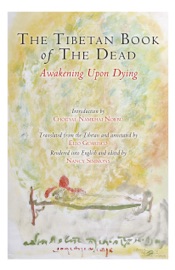